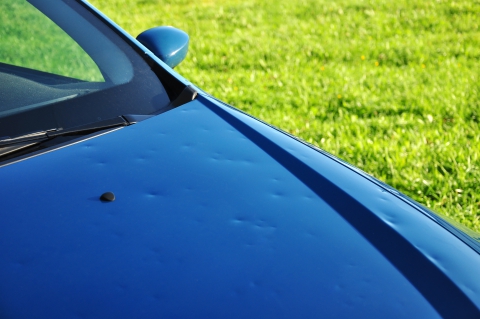 As the quarter-sized hail falls on your vehicle parked in your driveway and you can see the dents as they are made, you swear you’re going to clean out your garage so you can park your vehicle in it. Unfortunately, this resolution is a day too late because now you have hail damage to your vehicle. As you walk around your vehicle, you wonder, “Now what do I do?”

WHAT IS PAINTLESS DENT REMOVAL?

Paintless Dent Removal is a process where small dents are removed from the body of an automobile by tools placed underneath the dent. The dent is gently pushed back to its original location without scratching the surface of the vehicle. Depending on how severe the damage is to your vehicle, paintless dent removal can be completed in the same day. This process works on hail damage as well as body creases or other small dings.

Paintless Dent Repair requires no fillers and no sanding. PDR is cheaper and more effective than other forms of dent removal. It is environmentally friendly and takes less time to perform. PDR can be used on both aluminum and steel panels. Invented in 1960 by a Mercedes staffman who needed to remove dents on show cars before being exhibited, Paintless Dent Repair works extremely well with shallow dents (such as those from hail) and on metal that has not been stretched too much by the damage.

CID Auto Body & Repair uses special rods in order to maneuver the dent back into place and special lighting in order to see the dent much more clearly. Paintless dent removal approaches the damage from the inside, removing panels and trim when needed. Our technicians are certified in PDR removal, which means they have expertise in reaching and removing your vehicle’s dents without damaging other parts of your vehicle.